You are here: Home › About the Book 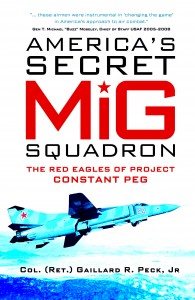 This book is the story of a group of military pioneers who were intent on using their experience and knowledge to develop a new training paradigm for fighter pilots. As a Vietnam veteran and Phantom F-4 pilot, Col. Gail Peck (call-sign “EVIL”) had been disappointed with the level of training offered to US fighter pilots. He was determined to ensure that US fighter pilots were unbeatable in the air particularly against their Cold War adversaries flying the already legendary MiG fighter jets. Working with the support of General Hoyt S. Vandenberg, Jr., and under conditions of the upmost secrecy the CONSTANT PEG program was launched with Peck as the original “Red Eagle.”

This fascinating unknown history was first revealed in Steve Davies’ acclaimed Red Eagles: America’s Secret MiGs but this book is the insider’s perspective complete with never-before published anecdotes and photographs, revealing how Peck battled bureaucracy and skepticism to ultimately establish the premier fighter pilot training center. Along the way Peck explores many of the central questions surrounding the project: why did the combat Air Forces of the USA find themselves in need of a major revision in their approach to air-to-air combat training? How did they secretly build an airfield to clandestinely conduct air-to-air combat training using actual MiGs as the adversary training platforms? What was it like to be a Red Eagle pilot or maintainer and what were the major challenges they faced on a daily basis? What did the USA get out of the program in terms of a return on investment? Was it worth it and where do we go now?

Despite operating for a decade no single pilot ever revealed the secret nature of the training until the program was eventually declassified in 2006. Now for the first time we can read about what it felt like to build the airfields, source the MiG aircraft and finally take them to the skies above America itself all in the quest to establish the USAF as the premier fighter jet force the world over.